FishAssist had an opportunity to sit down with the

Mariko is the host, or should we say co-host, of Hookin’ up with Nick and Mariko.  This season (her 5th) Mariko has taken on a co-host  - Nick Honachefsky.  Nick & Mariko travel the globe to interesting destinations and fish the local waters.  Hookin’ Up with Nick and Mariko airs on Sundays at 12:00 Eastern on WFN and replayed throughout the week.  Set your DVR to catch this awesome show.

FishAssist:  Mariko, thanks for taking the time to chat with us today.  We are sure our audience will enjoy learning more about you.  In which city are you currently?

Mariko:  45 minutes north of Toronto where it is currently -22 F.  We just completed filming for my “kinda” new show Hookin’ Up with Nick & Mariko last week.

FishAssist:  Was this season 4 or 5 for you?

Mariko:  If you count it as part of the Hookin’ Up franchise we can call it season 5.

Mariko:  Yes, it looks like you are going for quality over quantity, which is always a good thing.  My generation is savvy and doesn’t want to deal with any “crap”.   I think adding salt-water destinations would be interesting.

FishAssist:  This year brought on a change to the format of your show, a co-host.  Nick is a great addition to the show.  Can you discuss the format change?

Mariko:  Nick & I met during season 2 of Hookin’ Up.  We were headed to the east coast and a mutual friend suggested we reach out to fish with Nick.  Nick took us night fishing for blue fish.  Right off the bat we hit it off and it was true that Nick loves fishing – he eats sleeps and breaths everything fishing.  A friendship grew and we thought it would be cool to have a show that was hosted by both of us.  There aren’t that many fishing shows that are hosted by a man and woman and we thought it would be a good fit.

FishAssist:  Your father & uncle are pro anglers and we read that your grandfather initiated the first Canadian bass tournament.  It sounds like fishing is part of your DNA.

Mariko:  That’s right - ya.  And growing up I didn’t ever think I would make a living at it.  I obviously liked to fish.  Whether I wanted it our not it is definitely in my DNA.  I am very happy that it’s a part of me.

FishAssist:  How was life growing up?  What’s it like growing up with two pro anglers (father Wayne Izumi & uncle Bob Izumi)?

Mariko:  It was unique in that from a very early age I was used to a lot of travel, staying in hotels and meeting new people from the get go.  This wasn’t something that happened once a year on a family trip, it was a regular on-going thing in our lives.  My mom & dad and my uncle Bob & his wife included us in their lifestyle.  To be honest with you once the kids came they didn’t really stop their travels, fishing and outdoors lifestyle so we kinda got used to it right off the bat.  During the summers when school was out, my friends would be going to summer camps while my brother and I would travel to a different place every weekend following my dad and Bob to fishing tournaments.  Really the travel aspect and learning how to be flexible and adaptable was really ingrained in all of us from a very early age and I love that, I supposed that’s why I am really into travel and can’t get enough of it.

FishAssist:  It sounds like that was your initiation and preparation for later on in life.

Mariko:  Ya, it was so ingrained by that point that traveling for work was completely natural.   It really is all I’ve ever known.

FishAssist:  Besides all the great fishing, you get to travel to so many great locations and meet a lot of interesting people.  Do you ever just pinch yourself and say – wow this is my job!

Mariko:  I am definitely very grateful, I consider myself to be a very lucky girl.  However it still requires a certain amount of effort on my part to have made this into an actual living.  Don’t get me wrong, I had a huge head start and definitely gotten opportunities that others don’t get.  But, I’ve also taken those opportunities and have said “yes” almost every time, which I think some people are afraid to do.  I can’t tell you how many times I have to play on the edge of my comfort zone.  If you say yes the opportunities start to snowball.  It started out with the head start I was given and then my personality and desire to continue it has helped it turn into a career.  I am definitely very lucky and grateful.

FishAssist:  Who would you say has been your biggest inspiration?

Mariko:  I would think probably my dad.  We grew up very close and all the things I talked to you about so far is really from my dad and of course my mom who s been on board all along.  Watching my dad’s lifestyle, being his own boss and never really settling down even when he had a family – that’s always been the way that we lived and I love that way of living.  I would say it’s him because I’ve often tried to model what my dad would do.  He is also my sounding board if I need any advice.

FishAssist:  What can we look forward to in the 2014 season?

Mariko:  We’ve visited Florida, Puerto Rico and California which have already aired.  You can expect Tofino, which is on Vancouver Island, and one of my favorite places in the world in British Columbia, Canada.  It’s a much colder climate that we’ve seen so far but a lot of fun and a lot of beauty.  You’ll see a Costa Rico episode, which is amazing because it’s one of my favorite places to fish.  More islands fishing, I just came home from Dominica – the most unspoiled island in all of the Caribbean.  Also a really fun episode airing in two weeks in New York City.  It's an urban look at fishing – we catch some fish and have a lot of fun in the city.  Also a Florida Keys and a Cabo episode. 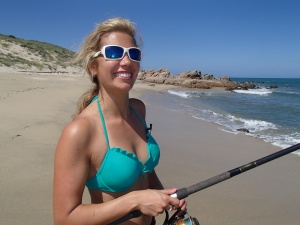 FishAssist:  Do you pick the locations or have any say so on where to film?

Mariko:  It has changed from season to season.  This season my producer Craig & I, along with Nick’s input chose the destinations.  We based it on when the fishing and climates were supposed to be good.

FishAssist:  If we might make a suggestion, there is a very exotic place called Texas.  When are you guys going to come back down to the Lone Star State?

Mariko:  We did it in season 1 and it was really cold.  When will we be back, I don’t know?  We just completed this seasons filming and haven’t started planning next season’s show yet.   Well see, I’ll put a note into my producer.

FishAssist:  What WFN shows do you like to watch?

Mariko:  To be honest, I tune into my uncle’s show “Real Fishing with Bob Izumi” from time to time just to see what’s going on.  Sometimes our families’ vacation together and I’ll talk to him at a family function.  But it’s hard to keep tabs so I’ll watch his show.  I tune in to WFN at different times to get vibes of different shows, but there really isn’t one I follow religiously.

FishAssist:  The camera loves you, is there any acting in your future?

Mariko:  (Laughing) I don’t think so.  I don’t know, I get a feeling that I’m really good at playing myself.  I was in a music video so maybe that’s a small step.

Thanks again Mariko for spending some time with FishAssist.  Tune into WFN for Hookin’ Up with Nick & Mariko on Sundays. 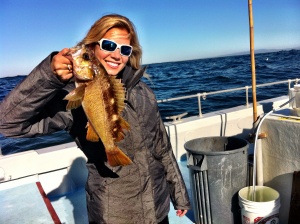